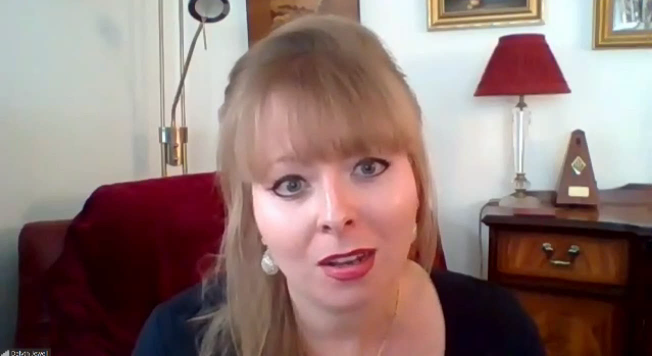 Delyth Jewell spoke in a Plaid Cymru debate about Plaid Cymru's plan to reboot the economy in order to recovery from the economic shock of the Covid-19 crisis. Here's what she said:

“I am so tired of waiting,

For the world to become good

And beautiful and kind?”

I saw those words of Langston Hughes on Twitter a few days ago.  Someone was quoting them in despair at how bleak our world seems.

Because we are facing many crises.  Aside from the scourge of racism, Covid19 threatens the future of our most vulnerable.  So far, the impact of the virus has been felt in the pain of losing loved ones, and losing moments through locking ourselves away.  But another crisis threatens to engulf the very sky above us – the economic calamity that faces us all unless we take drastic intervention.

I am dismayed that the Welsh Government has chosen, instead of grappling with the suggestions we’ve made in our motion to help the economy, to delete the whole thing, and replace it with a lackadaisical list of what they’re already doing.

Business as usual will not cut it.

Helen Mary Jones has ably set out what would be possible if we were bold.  Expanding borrowing power to £5bn and suspending annual drawdown limits – these are radical and necessary steps if we’re to save our communities from ruin.

As a Member for South Wales East, I’d draw attention to a report by the Centre for Towns which identifies three towns in my region as being most at risk.  Merthyr, Ebbw Vale and Tredegar are the same towns I mentioned in FMQs in March; I said then they need serious support, after batJtling on despite long-term neglect and underinvestment.

We need to prioritise areas like these for reinvestment, and give people the tools to rebuild their careers and their communities.  Let’s be bold:

There’s been a lot of talk all over the world of a Green New Deal: so let’s do it here in Wales.

Let’s establish a Reskill Wales fund, specialising in green technology to build a futureproof industry in line with this Senedd’s commitment to tackling the climate emergency.

Let’s invest in green transport and drive through initiatives such as decarbonising housing, starting with areas with the highest fuel poverty.

Let’s reinvigorate the foundational economy by linking communities and boosting infrastructure in towns that have been left behind, move government jobs there and encourage businesses to allow workers to work from home.

And let’s build this new economy on fairer foundations by prioritising wellbeing: we must ensure fair pay for carers who give so much to society, do much more to tackle disadvantages faced by disempowered groups, and guarantee access to mental health support for everyone who needs it.  As Chwarae Teg has pointed out, we should build a future economy based on the values of being caring human beings, and put people and planet at the heart of decision making.  That Langston Hughes poem has been shared by many in response to the structural racism and inequalities inherent in our society.  Whatever we build after this virus has passed has to eliminate the scourge of these inequalities too.

We’ve set out some of Plaid Cymru’s ideas, but we want to hear what the citizens of Wales think, which is why we’re calling for a Citizens’ Assembly to be established to that the voices of those people who often feel neglected by the political system are heard.  I was quite shocked that the government deleted reference to the citizens’ assembly in their amendment – I’d urge them, urgently, to reconsider that decision.  Let’s give the people of Wales a greater voice in our shared future.

Citizens’ assemblies have proved instrumental across the world in bringing in radical change with the buy-in of the people affected by that change.

We are facing the challenge of our lifetime, but we also have a chance here to build a world that is “good and beautiful and kind”.  If we are to succeed, we cannot do it alone.  The Welsh Government needs to start listening.  Please, begin today by giving serious consideration to the ideas my colleagues and I have set out during this debate, then be bold: establish a citizens’ assembly so that Wales can move forward, together, as a nation prepared.

“I am so tired of waiting,

If you'd like to read Plaid Cymru's economic plan to reboot the economy, it can be found here: https://www.partyof.wales/cynllun_adnewyddu