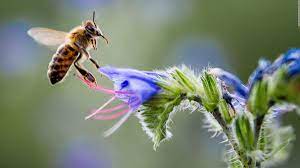 Plaid Cymru councillor Colin Mann has called on Caerphilly Council to review its policy of grass cutting to create more diverse vegetation and encourage bees, butterflies and other wildlife.

The Llanbradach councillor has written to Mark Williams, Economy and Environment Director, to raise concerns over what he says is “unnecessary grass” cutting across the borough.

In the letter, the former leader of the Plaid Cymru group said: “In some areas, there seems to have been an attempt to allow grass to grow and thus create more diverse vegetation which, of course, encourages pollinators and other wildlife.  In other areas there has been wide road verges regularly mowed which does not seem to have a justification or connection with road safety.

“This severe cutting back appeared to have continued unabated during ‘No Mow May’ when public authorities and others were urged to leave grass uncut to encourage biodiversity. A specific example is work done on the Llanbradach By-Pass which, I believe, costs in the region of £17,000 a year.

“Surely the money spent on this activity could be put to better use doing other things, especially when we are being reminded our public purse is stretched to capacity. Areas of benefit could include those that actually contribute to road safety such as the cleaning of road signs and the clearing of vegetation affecting the visibility of many signs at present.

“I recognise that some areas, for example, housing, are cut both for amenity and safety reasons and I imagine that these reasons will continue to be valid, although all areas should be subject to review.”

Councillor Colin Mann said that research had shown that mowing less frequently could provide enough pollen and nectar for ten times the amount of bees, butterflies and other pollinators and insects. The research also showed more than 200 species of plants, including rare meadow flowers, were found flowering within the grasses that were left to flourish.

“Roadside verges of longer unmown grass are far more diverse in their range of flowers, with nectar-rich plants like oxeye daisy, field scabious and knapweed increasing the range of nectar sources for different pollinators, therefore, extending nectar availability into late summer. Tall-grass species like oxeye daisy, red clover, field scabious and knapweed grow upright and take longer to reach flowering size. They can’t cope with being cut off regularly, so only bloom in grass that’s not been mown for several months or more.  This is why the scheme of cutting needs a thorough review.

“Action would make a substantial contribution to the Climate Action Plan and help to address the slogan of making the borough greener,” added Councillor Colin Mann.