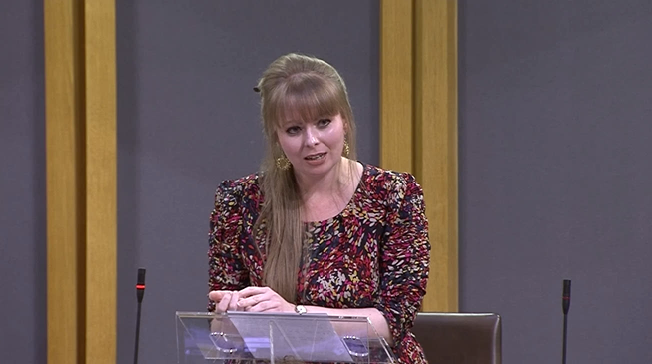 Ms Jewell pointed to evidence from the Bevan Foundation that showed a quarter of households have seen their income fall since the start of the pandemic, with 20% of the poorest households having to cut back on food, heating, electricity and water.

Two councils – Caerphilly and Cardiff – have already announced increases of 4%, which would add around £60 to the average bill of their residents at a time when families and individuals are struggling to make ends meet.

“We know that council tax is the most regressive tax we have, since it places the biggest burden on low income households, and we’ve had confirmation that councils, including Caerphilly Council in my region, intend to raise council tax by 4%.

“The Labour Party Leader, Sir Keir Starmer, said it is ‘absurd’ to expect hard-pressed families to pay more and called on central government to cover the proposed increases in England.

“Will the Welsh Government do so in Wales?”

In his response, the First Minister Mark Drakeford said:

“If the UK Government provide funding to allow that to happen, then we will get we assume, although that’s an assumption that becomes more questionable these days, a Barnett Consequential which would allow us to do more to help families here in Wales.”

He also pointed to the fact that the Welsh Government’s current council tax benefits system is more generous than in England.

“It’s not fair to expect people who have struggled over the past year to pay more council tax when many are struggling to make ends meet – the Welsh Government should step in to cover the cost.

“The Labour Welsh Government could fund this from its current unallocated funds whether or not the UK Government covers the cost for England, and I think it’s something they should prioritise given that council tax hurts the poorest households the most.

“A Plaid Cymru government would reform the outdated council tax system and make it fairer by alleviating the burden on the poorest households, but in the short-term, I believe the Welsh Government should act to prevent an unwelcome increase in bills in April.”

Link to Bevan Foundation report referenced in the article: https://www.bevanfoundation.org/publications/poverty-in-winter-2020/