Delyth Jewell MS has repeatedly raised concerns with the Welsh Government that their testing policy in relation to residents returning to care homes from hospital could have led to a significant number of avoidable deaths.

Up until April 23rd it was Welsh Government policy to refuse to test people entering care homes unless they were displaying symptoms, even though it was known that people who were carrying the virus but were not displaying symptoms would test positive if tested.

This meant that asymptomatic carriers of the virus were probably bringing Covid-19 into care homes every day, which may explain the substantial number of deaths that occured in care homes in Wales, prior to the policy being changed.

Below is the timeline of exchanges between Delyth Jewell MS and the Welsh Government.

In First Minister’s Questions, Delyth Jewell raises concerns about the Welsh Government’s testing policy on care homes. She noted that until April 23rd, residents were routinely returning to care homes from hospitals without being tested, unless they were symptomatic. She says that one care home in Gwent has suffered a substantial number of deaths through suspected infection via this route.

In his response the First Minister said that there was “no value” in conducting these tests.

Here is my exchange with the First Minister about testing residents returning to care homes from hospitals. I simply cannot understand the basis of his claim that conducting these tests would serve no purpose, so I've written him a letter to ask for an explanation. He does confirm that the Welsh Government has now changed its policy and that the tests will now be conducted, but he maintains there's no clinical value to them.

Channel 4 News broadcasts a report about the issue. You can watch it here.

I spoke to Channel 4 News about the testing situation in care homes in Wales. The First Minister told me yesterday that there's no point testing asymptomatic people returning to care homes from hospitals. But the scientific evidence shows that asymptomatic carriers do test positive for Covid-19. Every person entering a care home should be tested. This didn't happen in one care home in Gwent where 16 people died after a request to test a resident returning from hospital was rejected. My heart goes out to their families and to the care home staff who are devastated. We must not let this happen again.

Delyth Jewell MS writes to the First Minister to ask for evidence to support his claim that there is “no value” in testing asymptomatic people for the virus, given that the scientific evidence proves that asymptomatic people do test positive if they are carrying Covid-19. (If you're having trouble reading, click here to read the letter as a PDF). 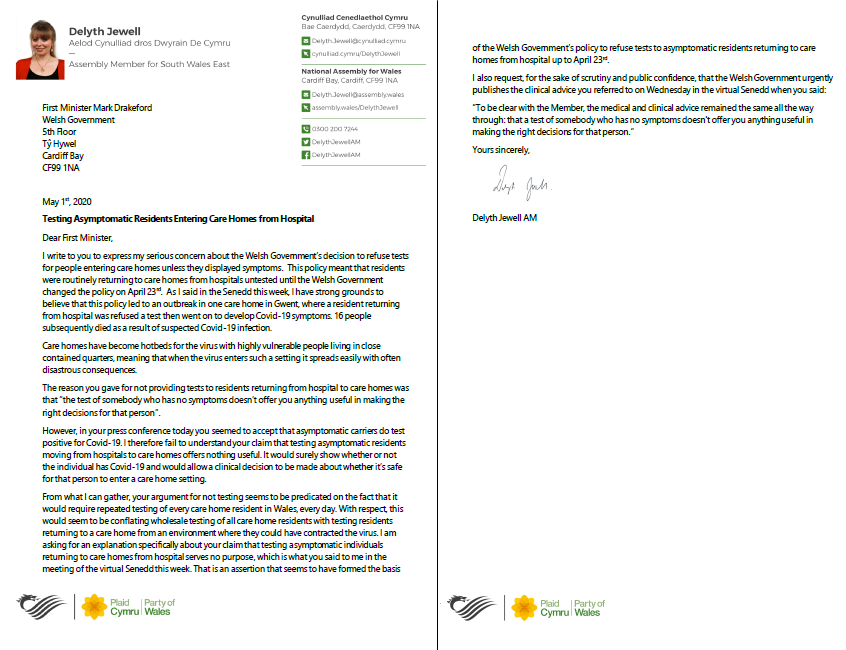 Delyth receives a response to the letter from the Health Minister, Vaughan Gething. Mr Gething fails to answer a single question that Delyth has asked in her letter. (PDF here). 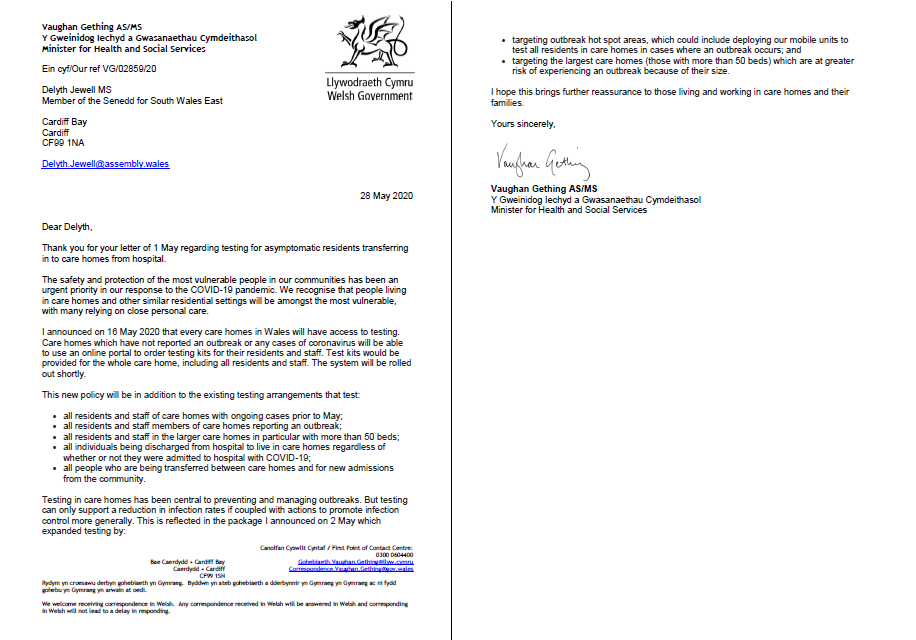 BBC Wales runs a story about the fact that over a thousand residents were sent to care homes from hospitals without being tested for Covid-19, because they weren't showing symptoms. Asked about the reason why the policy was subsequently changed, the First Minister said: "When the advice changed, we changed the practice."

This contradicts what he told Delyth Jewell on April 29th, when he said: "The reason why we changed the guidance was not because the clinical advice had changed, but because we recognised the need to give confidence to people in the sector."