Caerphilly: A Two-Horse Race Between Plaid's Delyth Jewell and Labour! 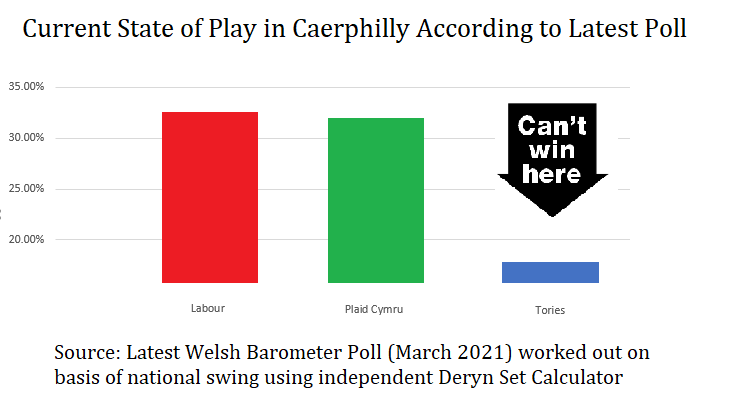 An analysis of the latest polling data provided by YouGov suggests that that the Caerphilly constituency is on a knife edge between Plaid Cymru and Labour.

In the last Senedd election, Plaid Cymru came a close second behind Labour, with the Tories way behind.

But the polls have tightened considerably since then, with Labour down 3% and Plaid Cymru up 3% since the last election.

Analysing these numbers on the basis of national swing suggests there could be as few as 200 votes between Plaid Cymru and Labour at the current time – which means every vote is going to count on May 6th, 2021. You can confirm this for yourself by putting the latest polling numbers in the Deryn Seat Projector.

“I think Caerphilly is a constituency that could very well spring a surprise in May due to a number of factors that suggest Labour may be in trouble.

“Plaid Cymru came a close second last time round and since then the Labour vote across Wales has decreased, whilst Plaid’s has increased.

“You’ve also got to take into account that Plaid have a truly outstanding candidate in Delyth Jewell, who is considered to be a rising star in the Welsh Parliament as an extremely hardworking and talented regional MS.

“I’m not at all surprised to see Delyth doing so well as a campaigner and parliamentarian since she worked beside me in Westminster for a number of years and proved herself to be completely reliable and honourable, as well as providing work that reached the very highest standards.

“I would urge the people of Caerphilly who are tired of Labour to give Delyth Jewell the chance to show what she can do for this constituency by voting for Plaid Cymru in the election.”